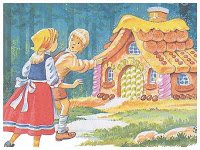 I'm having a little trouble in a discussion with some young people. Their claim is that God and the life of Christ is "a fairy tale" and therefore not true. Something lacks in critical thinking skills, methinks: since when were fairy tales NOT true?

Let's take "Hansel and Gretel", for instance. Two parents who are desperate: they can no longer afford to feed their children. Lot of that going around these days. That much is true.

The parents hit upon a stupid plan: kill the kids or take them out to the woods and abandon them. Sadly, stupidity abounds. Some parents have taken these routes, either out of fear, ignorance or evil. We've become accustomed to abortion and abandonment in our culture.

So, we end up with two kids trying to survive on their own and using their wits to stay alive. Yep, kids around the world do that all the time.

Then, something evil, which appears to be good appears: a candy house! (Of course, H & G don't know that the witch is drawing them in.....but they will!). Things in our world that appear good but are really bad, marketed to children? Hmmm, that DOES sound familiar.....

The point is, just because something hasn't really happened, doesn't mean it isn't true.

Now, let's talk about God. Did God make one woman and one man, named Eve and Adam, from whom the whole world was populated? (At some point, you HAVE to deal with the incest issue, ya know.) That doesn't mean the story in Genesis isn't true.
Don't misunderstand me: I'm NOT saying that Jesus never walked the earth, or that He was not the Son of God. I AM saying that one cannot dismiss a legend, story or tale as "false" just because the account of said story cannot be historically documented. We rely on these types of stories for our family, national and religious identities. The reason these stories stick around is that they are TRUE in the greatest sense: they contain the very real stuff of humanity - our hopes, dreams, joys, fears, and the delicate pieces of our souls. We cannot dismiss them any more than we can dismiss our very selves: the whys and hows of us and our human existence.
You can argue a lot of things, but you cannot say these tales are not true. Hansel and Gretel would beg to differ.
at May 03, 2010

Email ThisBlogThis!Share to TwitterShare to FacebookShare to Pinterest
Labels: teaching