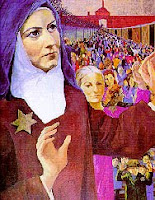 This blog is entrusted to the patronage of St. Edith Stein, and today is her feast day.  She is also known by her religious name, Sister Teresa Benedicta of the Cross.

Edith was born in Germany in 1891 to a pious Jewish family.  She was the youngest of eleven children, and her father died when she was young.  Her mother, a devout and intelligent woman, took over the family business and raised the children.

Edith was a very bright girl, but given to fits and bouts of depression.  She was...sort of "bratty" and spoiled as a child.  By her own admission, she became an atheist at a young age, and remained so for years.

She studied philosophy, eventually earning her Ph.D. under Edward Husserl in the school of phenomonology.  About this same time, she read the biography of St. Teresa of Avila, and became a convert to Catholicism.  She eventually entered the religious life at Carmel.  She died at Auschwitz.

This is a bare-bones outline of her life.  There are several great biographies of Edith Stein, and they are worth the read.

I love Edith.  She was a top-notch academic, wholly feminine and greatly promoted the role of the feminine in culture and in the church.  Her thinking greatly influenced John Paul the Great - and that's saying something!  She was a humble woman, a teacher of great influence and charity, a daughter concerned for her mother's heart and soul, and a martyr.  Most of all, she loved God, and desired nothing but His will.

She said this of her beloved Germany in the 1930s as she watched with horror the rise of the Nazis:  The nation... doesn't simply need what we have. It needs what we are.   It seems to me that this is true today of us and our beloved nation.

St. Edith Stein, Pray for us.

Email ThisBlogThis!Share to TwitterShare to FacebookShare to Pinterest
Labels: saints