What is "good" and who gets to decide? 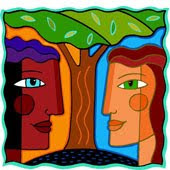 Mark Shea, in his delightfully amusing way, has been writing some terrific pieces lately:  http://markshea.blogspot.com/.  He's been using his own girth to poke holes in the gay marriage/rights debate.  Check it out.

Today, this line of his really struck me (and yes, he's being sarcastic):  The sole criterion of the good is what two or more consenting individuals want to do.  That's really where we are at in our society, isn't it?

This isn't a throw-away idea.  It is vitally important.  What is "good" and who gets to decide?  Do we each get to decide what is "good" for each of us?  Could there be a different "good" for me than there is for you?  What if my "good" infringes on yours?  Whose takes precedent?  What if you think my "good" is fundamentally evil?  Can there even be a "fundamental" evil?

This comes down to whether or not there is an objective standard of truth.  That is, can we, as a society, declare "THIS is true, no matter what"?  We don't seem to be able to do this.  Most people would say,  "Human life is good", but the "no matter what" part is where people want to hedge their bets:  "...unless I'm in pain", "...unless the baby is 'unwanted' ", or "...except if he's profoundly handicapped."

We might agree that murder is wrong, but then we have the scandal of the death penalty.  Child abuse is punishable by law, but we might be likely to give a lighter sentence if we know the abuser was once abused.  Is there one single issue that we, as a society, are willing to declare either "good" or "evil"?

Once upon a time, humans were given the opportunity to trust God and allow Him to decide what "good" and "evil" were.  They (whom we call Adam and Eve) decided not to trust God and to rely on themselves for this knowledge.  It did not go well.  And I fear it will not go well for us, either.
at August 31, 2010