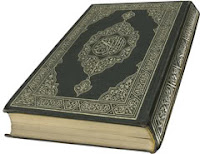 Some guy in Florida wants to burn the Qu'ran.
I've never thought book burnings of any kind were a good idea.  Too "Fahrenheit 451" for me.  (If that reference eludes you, go to your nearest library.  And thank the librarian for not burning the book.)
There are a couple of things that really bother me about this particular book burning.  First, you have the Army guy in charge of things in Afghanistan saying,  "This is going to make things tough for our men and women in uniform."   Gee, that doesn't seem like a nice thing to do?
Second, burning books is just dumb.  It doesn't prove a darn thing, it makes a huge mess, and mostly it intrigues people to read the very books you are torching.  Duh....
Finally, this is a sacred book to millions of people.  And if this Florida pastor had taken a few minutes to peruse the Qu'ran, he'd see that A LOT OF IT IS JUST LIKE THE BIBLE.  I don't mean, it sort of resembles the Bible in literary technique, or it looks like the Bible, I mean:  the stories of humanity ARE THE SAME.  Same beginnings of humanity, same Mary, same Noah's ark.  Yup.  Really.  I would not lie to you.  Pick up a copy and read it.  Don't burn it.  Read it.
If, after you have read it, you wish to engage a Muslim in theological discourse, go for it.  Buy him or her a burger and chat.  THAT is how we'll advance Christian/Muslim dialogue.  Put the matches down and talk.
at September 08, 2010