I stumble and fall 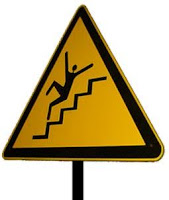 I fell the other day.  Down the stairs, at work.  I don't really know how.  I wasn't carrying anything, wasn't wearing high heels, wasn't hurrying.  I just slipped...and fell.

Two days later, and my leg is telling me it hasn't fully recovered yet.  Apparently, I pulled my hamstring, and I'm walking around with a decidedly ungraceful limp, on my toes.

This little incident reminds me of sin.  Most of us don't struggle with BIG sin:  murder, embezzlement, extortion and such.  No, we are petty, gossiping, rude and thoughtless.  We tell that little white lie and overeat a bit.  It's not the big stuff that gets us:  it's the little slips, and then we fall.  And then we have to walk around, rather ungracefully, and make concessions and adjustments because of those little sins.

Whenever we injure ourselves, it makes us very aware of our bodies.  You suddenly realize how many things you do with that hand when you've got a couple of sprained fingers, or how you never pay much attention to getting off the couch until your back hurts.  You are aware of the tenderness, the swelling, the bruise and are thankful for when things return to normal.

I wonder what it would be like if our sins caused us bodily injury, if you got a bruise every time you raised your voice to your kids, or you got a pain in your back when you flipped off that guy in the car next to you.  I am sure I would be one large, aching mess.  By the grace of God, this is not the case.

I am now, of course, vigilant on the stairs.  I suppose I will be for awhile and then, I'll hurry and forget, and probably slip again.  Just maybe, however, I'll keep being vigilant and I won't fall.  Maybe I'll hold on to the rail and remember the pain I had before.  What I will think is,  "Steady my feet, Lord, in accord with your promise;  do not let iniquity lead me."  (Ps. 119:133)  And I'll remain graceful;  I will not stumble and I will not fall.
at September 02, 2010