What were they thinking?

I spent some time yesterday outside an abortion clinic, praying.  It was part of the 40 Days for Life campaign  (http://www.40daysforlife.com/about.cfm).

I've never done this before, so I really didn't know what to expect.  It was prettty quiet, actually.  There were a couple of us praying, and one guy holding up pro-abortion signs.  The clinic isn't open on Saturdays, but there were a lot of people in the city for various events, so there was much traffic, both on the sidewalk and the street.  One guy screamed at me out of his car window that I was a Nazi, but that was about as raucous as it got. 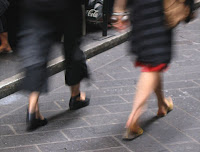 The guy holding the pro-abortion signs didn't look like a nut, and I didn't assume he was.  I sort of assume most people do NOT wake up in the morning setting out to do something intrinsically evil;  they figure what they do is good....most of us want to do good.  For whatever reason, this guy thinks that abortion is good.  I think he's wrong, but I don't think he's crazy.

I know I've seen sidewalk preachers and folks handing out religious "information" that clearly are a few sandwiches short of a picnic, as my mom would say.  Did these folks going by, honking their horns and waving in support of the pro-abortion guy, think I was like them?

Yeah, I'm rambling.  I'm just curious:  if we both think the "other side" on the abortion issue is crazy, evil, fanatical, zealous or just plain nuts, how will we ever get around to solving the problems of helping women, babies, fathers and families in crisis?
at October 03, 2010