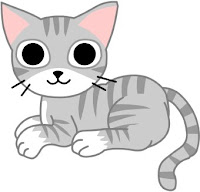 I admit it:  I've never been a "cat" person.  I've always found the personality of dogs much more companionable and attractive.  (More on this later.)   I've been around cats my whole life:  Domingo, Adam and Eve, Snowball, Puff-n-Stuff, some feral cat my sister dragged home that never settled down enough to be named but dropped a bunch of kittens on the front porch.  None of 'em ever appealed to me.  Until now.

We currently share living space with two cats.  One cat is Arwen, named after the graceful Elf of The Lord of the Rings fame.  She (the cat) has the long, flowing black hair of Liv Tyler.  Arwen (again, the cat) chiefly resides outdoors, but when the weather is cold and/or rainy, she prefers a nice warm lap.  She's our hunter, and keeps mice out of the garage.  Unfortunately, she also keeps birds at bay.  She's a bit skittish, and hates our other cat.  She has the best darned tail - tall, straight and fluffy - in all of cat-dom.

The second cat is Imogene, known by most of the family as Mojo.  Mojo is a rescue and considers all the house her personal play space.  She loves grocery day, which (I think) she thinks of as "bag day": she equally enjoys plastic bags and paper bags.  One of her favorite games (and she has many) is to hide under the tablecloth and bat the dogs as they walk by.  She's chatty, snoopy, relentless and funny.  She also thinks it's jolly fun to chase Arwen around the house.  I'm not sure she really enjoys the chasing so much as the annoyance it causes Arwen.

I cannot (gulp) imagine our household without either of them.  That's a lot from a bona-fide dog person....but I think the dogs sorta feel the same way.
at November 04, 2010

Email ThisBlogThis!Share to TwitterShare to FacebookShare to Pinterest
Labels: family