Today's Geek comes from a conversation I had in the car this very morning with Tallest Son. 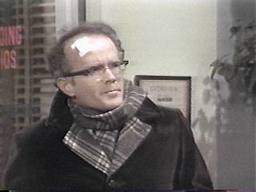 This (for those of you too young to remember) is Les Nessman, from the TV show "WKRP in Cincinnati".  He was the hapless news director who was prone to self-injury and mispronunciation.  I actually own a stuffed dog named Les, because of an episode where he reported on a dog show, and announced the winner to be a "chi-hooie-hooie" dog (he meant Chihuaha).
Despite his flaws, Les was extremely kind and lovable.  Here's to our geekly co-workers, family members and friends.  Give 'em a hug....and possibly a Band-aid.﻿
at March 28, 2011

Email ThisBlogThis!Share to TwitterShare to FacebookShare to Pinterest
Labels: geek