I was pondering some inspiration for the blog, and my mind went to a conversation I had with Tallest Son a week or so ago.  As life would have it, Youngest Son likes a TV show that Tallest Son finds....dumb.  He also likes to make fun of Youngest Son for watching it.  After an exchange that focused on things like,  "That's so stoooopid", I suggested the following to Tallest Son:

"Honey, I hate to break it to you.  You are a geek, in a family of geeks.  Just because you don't like the same geeky things as your brother, doesn't make you less of a geek.  Back off."  Tallest Son laughed, acknowledging the truth of it, and left his brother alone.

Dearest Husband is an engineer, with a BA in physics.  His hobby is bonsai trees.  I have a Master's in world religions, and I read, blog.  We rock at Trivial Pursuit.  We are geeks.

As a high schooler, being a geek isn't that great.  You're on the "outside", as it is perceived by the social stratosphere of teendom, and it doesn't always feel great.  I've even felt it as an adult, picking up a magazine in a doctor's waiting room and not recognizing myself or my life in some "women's" magazine.  "Who are these women?"  I'll think.  However, as an adult geek, you get more comfortable in your own skin, and find that the most interesting people around are....geeks.

With this in mind, I'm gonna start a little blogging tangent on favorite geeks.  Feel free to jump in with your own suggestions. 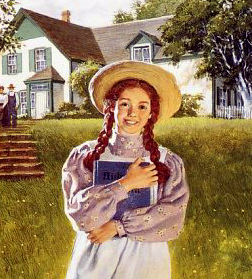 My first favorite geek:  Anne of Green Gables.  She knew she was different:  red-headed, orphaned and definitely an outsider.  She had a nerdy vocabulary, a flair for the dramatic and she refused to be bullied or put in a box.  Remember her recreation of "Lady of Shalott"?  Pure geekdom!