From USA Today:  The scandal comes at a time when the former California governor is seeking to resurrect his acting career, And, a made-for-the-movies affair is just the thing to get people talking again about an aging action star, says branding expert Amy Tunick.

"The story is salacious and brings him back to the public eye. It almost makes him a sex symbol," Tunick says.

"IT ALMOST MAKES HIM A SEX SYMBOL"????  What on God's green earth are you talking about lady???  He's destroyed his 25 year marriage, brought painful, public revelations heaping down on his wife and four kids, committed a mortal sin, brought a kid into the world that he has not been able to properly acknowledge, let alone parent, and IT ALMOST MAKES HIM A SEX SYMBOL?????

You, lady, are an idiot.  The same type of idiot that Mr. Schwarzenegger is:  someone who has no moral compass, and has confused fame with goodness.  Ms. Tunick:  stick that in your "branding expert" pipe and smoke it, along with whatever else you've got in there. 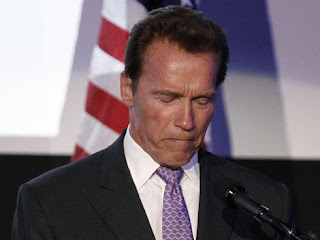