Jogging in a Hurricane 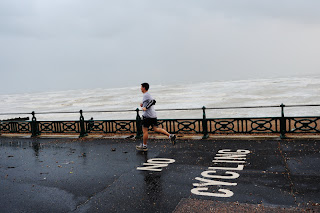 Like many of you, I watched the progression of Hurricane Irene over the weekend as she swept up the East Coast.  At one point, the camera caught a person jogging through the streets.  The person was in several inches of water, and being pelted by rain, but on they ran.  I thought,  "What an idiot!"  What could possibly compel a person to jog in a hurricane?

As I thought about that image over the day, I thought about all the times when I have "jogged in a hurricane".  Sometimes, it was doing something ill-advised - I felt I had  to do whatever the task was, even though people around me told me it was a bad idea.  Of course, I KNEW it was a bad idea, but, being the stubborn girl I am, I stuck it out....all the while muttering to myself how stupid the whole idea  was.  But I sure wasn't gonna back down, and let anyone have the satisfaction of "I told you so".  I kept jogging in the hurricane.

More often, though, my experiences of jogging in a hurricane have been when a storm swept around me and I really did have to keep going.  Raising my kids, I often found myself in a storm of circumstances:  social workers, mental health issues, psychiatrists, special education needs, juvenile court, attorneys.....the rains pelted, the winds blew, and I had to keep going.  I wanted to stop, I would have stopped....but I couldn't.  There was a race to be won, and I had to keep running it.  I had to keep jogging through that hurricane.

That guy I saw on the news must have had a reason for jogging in that hurricane.  Maybe he WAS an idiot, but more likely, he was compelled to run the race that either he had chosen, or was chosen for him.

They saw the works of the LORD,

the wonders of God in the deep.
He commanded and roused a storm wind;
it tossed the waves on high.
They rose up to the heavens, sank to the depths;
their hearts trembled at the danger.
They reeled, staggered like drunkards;
their skill was of no avail.
In their distress they cried to the LORD,
who brought them out of their peril;
He hushed the storm to silence,
the waves of the sea were stilled.
They rejoiced that the sea grew calm,
that God brought them to the harbor they longed for. Psalm 107: 24-30
at August 30, 2011