Clearly, the life of Blessed John Paul II gives us much to ponder.  Here is my favorite story, from George Weigel's Witness to Hope:

Wojtyła disciplined young priests in a distinctive way. He once had to call in an assistant pastor who had committed what the priest later recalled as a “serious misdemeanor.” In a lengthy session in his office, Wojtyła told the curate in no uncertain terms about the gravity of the offense and reprimanded him severely. The cardinal then led the young priest into his chapel so they could pray. The older man knelt so long that the curate became nervous. His train was scheduled to leave shortly to take him back to his parish. Finally, Cardinal Wojtyła stood up, looked at the young man he had just chastised, and
said, “Would you please hear my confession now?” Stunned, the assistant pastor went to the confessional, where Wojtyła confessed before him. 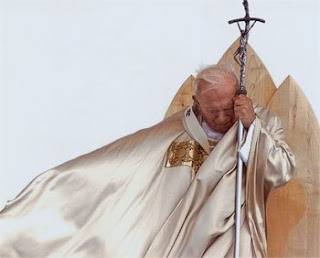