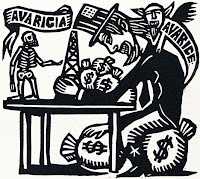 In Catholic teaching, we have a much fancier name for greed:  avarice.  The Catholic Encyclopedia says this:  Avarice (from Latin avarus, "greedy"; "to crave") is the inordinate love for riches. Its special malice, broadly speaking, lies in that it makes the getting and keeping of money, possessions, and the like, a purpose in itself to live for. It does not see that these things are valuable only as instruments for the conduct of a rational and harmonious life, due regard being paid of course to the special social condition in which one is placed. It is called a capital vice because it has as its object that for the gaining or holding of which many other sins are committed. It is more to be dreaded in that it often cloaks itself as a virtue, or insinuates itself under the pretext of making a decent provision for the future. In so far as avarice is an incentive to injustice in acquiring and retaining of wealth, it is frequently a grievous sin. In itself, however, and in so far as it implies simply an excessive desire of, or pleasure in, riches, it is commonly not a mortal sin.

Why am I thinking about greed?  Because I'm thinking about the chuckle-heads occupying Wall Street, and their demands that people with money give it away to those with less money.  Eldest Son called Dear Husband last night, and was extolling the virtues of the Occupy Wall Street gang (be kind, he's young), but said the chief problem with "Wall Street" was greed.

I got news for you, kid:  greed knows no bounds.  It ain't just "Wall Street" that's greedy.

Every year on Thanksgiving Day, our local newspaper publishes a special section for wishes.  People write in, for themselves or on behalf of others, and ask for donations of items and services.  For the most part, it is pretty altruistic:  someone writes in on behalf of an elderly neighbor who needs a roof repaired....that sort of thing.  But every year, there is an onslaught of this type of entry:  "I'm a single mom of seven.  My kids are doing really well in school, but I don't have a job and can't afford to get them the gifts they deserve at Christmas.  My 16 year old would love an iPad, my 12 year old wants an XBox, my 7 year old would adore a Barbie Jeep....."

Ray Nothstine, in the most recent Acton Commentary, notes that government is a greedy goblin as well:
Today the Occupy Wall Street movement and its echo chamber in the media denounce corporate America. But a smaller headline in Bloomberg News about Washington edging out San Jose, Calif., as the wealthiest U.S. metropolitan area raised eyebrows, too. The total compensation package for a federal employee in the beltway now exceeds $126,000. There are many hard working and patriotic federal employees, but as the federal government payroll increasingly coincides with a diminishing private sector, government employees are rapidly moving closer to the 1 percent.

The point is:  greed is a human vice.  Anywhere you go, you'll find it.  If you hang out with the Occupy Wall Street folks, someone will point out to you who has the better protesting spot, the better tent, the best fleece.  We can't help it.

Whether we are jealous of someone's new car, their penthouse on 5th Avenue, their job, their well-behaved kid or their bank account, it's all the same thing:  greed.  And we're all guilty of it.  What the Occupy Wall Street folks need to understand is that they're being greedy....and that ain't good.  But they are in good company:  you, me and the rest of humanity.
at October 26, 2011