I'm not really sure what to think about the Wall Street protesters.  I understand the fury of money being mis-used by anyone, but especially those in power.  However, I really don't get the idea that capitalism is somehow at fault for our economic woes, nor how sitting in on Wall Street is going to fix a darn thing.  (I keep wanting to tell those people to go volunteer somewhere if they can't get a job...)

Then, I heard last night that the protestors were going to march in front of the homes of the NY wealthy.  Huh?  What's inherently wrong with being wealthy?  Why does that need to be protested?  Which one of us wouldn't want to be wealthy?

And why, if being wealthy is such a sin, aren't these folks picketing the likes of Sarah Jessica Parker and Conan O'Brien?  They're rich.  They've made money "off of" people.  Isn't the entertainment industry greedy?? Grab your sign and let's go....

Or is that not cool?  Is there a pecking order of capitalism that must be adhered to?  I'm just pondering here....no answers....but the choices the protestors are making are....interesting. 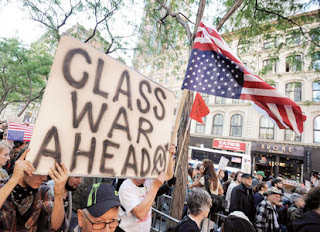