Storming the castle with the Green-eyed Monster 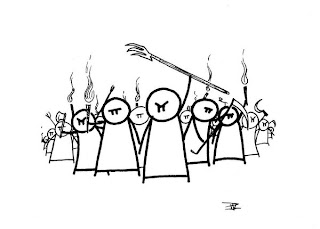 I've really been trying to figure out the whole "occupy Wall Street" thing.  I can't for the life of me figure out what this sit-in is supposed to accomplish - but that may just be because I'm more about action than sitting around crying about a problem.

Then I started thinking that this really isn't a new problem;  it's a really, really old problem.  It's called Envy.

I know it when I see it:  because I suffer from it.  I'd love to be able buy really expensive (REALLY expensive) shoes.  You know those women who have house-sized closets?  I want to be one of 'em.  I drool over designer fashions, shiny magazine ads, expensive makeup, and glittery jewels.

I shop at Goodwill.

That's reality.  I deal with it.  I have a nice wardrobe, and consider myself quite well-dressed.  What I wish I had is not going to happen, so I get what I want within the realm of my reality.

Is that what is going on with the folks occupying Wall Street, and all the other baby-occupations that have sprouted up?  Are they simply envious of what others have and they don't?  As I said, I'm still puzzling over the whole thing, but I'm betting envy is part of it.  After all, we humans don't keep inventing new sins - we simply recycle the same ones.  Isn't that the problem that Adam and Eve had, after all?  They simply wanted what God had:  omnipotence.  That snake whispered that it was within their reach, and they snatched that apple.