The circus that is Kim Kardashian 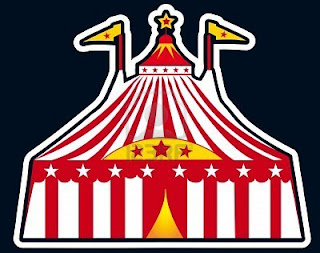 I've been trying to nail down exactly how I feel (other than complete disgust) about the whole Kardashian-reality-wedding-divorce-idiocy.  I think this article sums it up quite well:

Mr. Barnum would have had a higher regard, I suspect, for the other humbug in the news this week, Kim Kardashian. But he would have been a little perplexed at the general reaction to the news that she wants a divorce: Mr. Barnum always maintained that the public doesn't mind being swindled as long as it is entertained. Why then all the outrage? The conceit has been that Ms. Kardashian's television show captures something approximating the reality of her ludicrous life. The tube pretends to be a telescope even more powerful than the one attributed to Herschel, a lens that lets us spy, from a distance, exotic life forms. Here the humanoid on display was a rapaciously acquisitive creature engaged in elaborate and expensive mating rituals. Now it turns out that, though rapacious acquisition was an honest enough expression of the creature's nature, the mating ritual may not have been in earnest.
People seem to be upset by this revelation. Does it mean they were bamboozled in the first place? Now that's hard to believe.
No, I think people are annoyed because the burlesque wasn't nearly entertaining enough—they were cheated out of the spectacle that had been promised. The divorce was a given. But jumping right to it showed a disregard for the craft of reality TV. Where were the nightclub screaming matches? Where were the inevitable infidelities that would have pushed the tawdry plotline along to its natural conclusion?
We hope for a better standard of hooey from our reality performers. We expect their hoaxes to be more competently executed. In these plastic times of ours, even the fakes are phony. Is it too much to ask for artistes of con who can come up with bat-men on the moon?
at November 04, 2011