I did it! I found the stupidest article on the New Roman Missal! 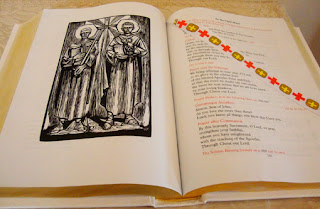 Certainly, enough ink has been spilled on the changes in the language of the New Roman Missal that even most non-Catholics and nominally religious folk have heard about it.  Some of the stuff that has been written has enlightened, some entertained, and some, well....has been stupid.

This is one of the latter.

If you're not aware, we Catholics are adjusting some of the language of the Mass.  When the Mass was first translated into English from the Latin following Vatican II, some of the translations were sloppy.  Now, we're adjusting.  Honestly, the new language (while clearly going to take us a little while to get used to) is lovely and poetic and beautiful.  Unless you're her:

But Monica Malpezzi thinks the new language is stilted and confusing and will only create a barrier between people and God. "If we have to scramble for understanding in what our prayer life is, I think that will make it harder for us to feel that God is right there with us."

I'm sure Monica is a lovely woman, but guess what?  It doesn't make one bit of difference what you FEEL.  You can FEEL grouchy, happy, slovenly, or courageous:  God is there regardless.  And yeah, the language is going to FEEL a bit stilted and confusing until we get used to it.  That doesn't mean it's "bad".

Bishop Donald Trautman, former chairman of the bishops' committee for the liturgy, says the priests now have to recite some sentences that are 90 words long. He also dislikes the formal tone. For example, in one funeral Mass, the priest implores God to give the departed "kind admittance to Your kingdom."
"If your mother or father or brother or sister died," Trautman says, "would we want one of us to say, 'Welcome into Your kingdom?' Or do we want to say, 'Give kind admittance into Your kingdom?' I have [an image] of someone being a ticket-taker at the door giving out tickets to enter, giving kind admittance."


Really, Bishop?  'Cause if I am standing outside the Pearly Gates, I'm gonna be begging for kind admittance.  Begging.  On my stupid, sinful, unloving, uncharitable knees: begging. Would I "like" kind admittance"?  Yeah, but I sure don't deserve it.  No one does:  Heaven is granted to us by God's kind admittance - so why not say it?

On the whole, Mass went well this morning.  Our pastor got a bit lost once, and we all stumbled a bit over a response or two, but the language is beautiful and uplifiting:

"Grant your faithful, we pray, almighty God, the resolve to run forth to meet your Christ with righteous deeds at his coming, so that, gathered at his right hand, they may be worthy to possess the heavenly kingdom."

And isn't that all that matters?