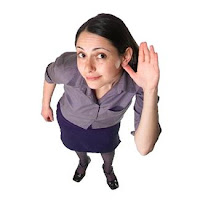 A number of years ago, I had piled the kids into the van on a cold winter morning, and we headed out.  After a few miles, I said,  "Is everyone toasty warm now?  I'll turn down the heat...." and a bunch of voices chorused, "Yes."  Then, after a long pause, Tallest Son said, very innocently,  "Why did you ask us if we were  toasted worms?"  "Toasted worms" is now part of the family lexicon.

Yesterday, I discovered that a bottle of liquid had spilled all over in a drawer in my bathroom.  I hollered at Youngest Son to bring me a roll of paper towels.  He showed up, a moment later, with said roll in one hand and a bowl in the other.   I took the paper towel and thanked him, then turned to clean up the mess.  Youngest Son said,  "Aren't you going to take the bowl?" and I replied, "I don't need a bowl, just the paper towel."  And he said,  "Then why did you ask for a bowl and paper towels?"  Uh, I didn't....?  Roll, bowl....you see what happened.

It made me think of how many times we mis-hear God.  How do we know that we know exactly what God is telling us?  It often seems that we hear one thing from Scripture, another from a sermon, someone on the internet has another opinion....how do we know what's right?  How do we keep from getting "toasted worms", spiritually?

As Catholics, we always have the assurance of the Magisterium.  We can always trust the Catechism, and that's a good place to start.  So is a good Catholic study Bible.

Beyond that, if you're really serious about your spiritual life, you should have a spiritual director.  Ideally, this should be a priest, but very few priests today have time to do solid one-on-one spiritual direction.  However, you can always ask.  If there is not a priest available, many religious orders offer sound spiritual direction, and that's a terrific way to discern God's will in your life.

There are also a few things NOT to do.  Don't trust everything on the internet, the radio or TV.  Just because someone has a blog, a video channel on YouTube or a program of some sort, it doesn't make them a spiritual advisor, or even a trusted source of wisdom - and yes, that goes for me too.  If someone says something that goes against the Magisterium, Scripture and the Catechism, don't trust 'em.

Also, beware the "cult of personality".  Just because someone is a great writer or speaker, a charismatic individual, they aren't Christ.  As Christians, we follow Christ, and none other.  To become enamored with someone else, even someone who is holy and good, is to be led astray.

It is sometimes hard, in the world of noise and distractions to hear God's voice, and it is always good to have a plan to discern His voice.  Otherwise, you end up with toasted worms and a bowl you have no use for, and who needs that?