Christ in a cab

I don't ride in cabs very often.  Hardly ever.  But I did today.  And I met Christ there.

My driver was loquacious.  He had Christmas music playing, which sort of annoyed me, since I've been avoiding Christmas music.  I'm just not in the mood.  But there you go.  Then he mentioned that he hadn't always celebrated Christmas:  "before I knew Jesus".  He told me that he'd been driving a cab a number of years ago, Christmas Eve, waiting in a Rite Aid parking lot for a fare.  The radio was on, and the announcer said, at the stroke of midnight, that many people were now celebrating the birth of Christ....and then it started to snow.  The cab driver said,  "That's when I believed."

He said he'd spent a Christmas in San Diego,  "Crazy....heh....lights on palm trees."  He mentioned a Christmas in the Marine barracks when he was a young man, "We made the best of it."  He laughed and said "All I want for Christmas this year is for my boss to fix the wind shield wipers on my cab." 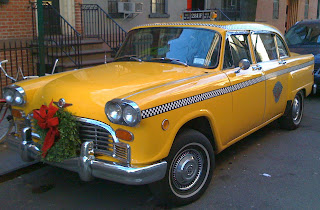 His coat was torn, and his hair was shaggy.  He wore a lot of experience on his face.  His voice was soft but I knew his vocal chords had been swimming in smoke for a long time.  This was not a "man of means".

I didn't know today that I'd meet Christ in a cab, but I did.  A sweet man, scraping out a living, who invited me to his church's Christmas concert on  Sunday night.  Spreading a little Christmas cheer - and being Emmanuel, God-with-us to a total stranger.  Christ in a cab.  Who knew?
at December 15, 2011