That light at the end of the tunnel: it's a train, isn't it? 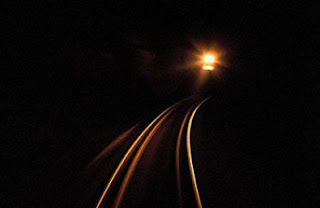 After months of being out of our home, Dark Haired Daughter is set to return next week.  Back in January (while on probation for another matter), she assaulted me and her sister and was arrested.  She stayed in detention for months, as Dear Husband and I fought for a residential treatment placement for her.  She's been in treatment since early spring, where she was diagnosed as bipolar.

She's done well in residential.  She always does well in residential - she's been through this a few times.  You see, residential is a place that is staffed 24/7, with strict rules, limitations and limited choices.  For someone with her depth of mental illness and limited cognitive abilities, this is just the type of structure she needs to be successful....and just the type of structure that two parents in a two-job house can't provide.  A staffed facility offers eyes and ears and limits we just can't sustain.

And just to add insult to injury:  for the first time in YEARS, she is doing well at her school, loving it, achieving, and getting positive feedback from the teaching staff.  Now, I don't even know where she'll be at school in mere days.  She's been suspended and kicked out of almost all of our choices.

I had a meeting with Daughter's social worker a few weeks back.  It's yet another new worker....and the woman hadn't even opened the child's file prior to the meeting.  Now, Daughter's file is now the size of the Gutenberg Bible, so I understand that it's daunting, but still.  And at this meeting were three other adults....none of whom have ever met my Daughter...and the consensus:  send her home!  She's been doing great here!  She's ready!

But no one else is.

I dread having her home.  There, I said it.  It will be fine for a while, and then it will be really, really not fine.  It will be dreadful.  It will be dangerous and awful and screaming and running away and stealing and suspended and violent.

It will put my other children in harm's way.

It will be stomach-churning stressful for all of us.

And there isn't a damn thing I can do.  Because the law says she has to be at home - "family unity" is key - and there is nothing else anyone is willing to do.  I sat in a meeting with three social workers and told them that this was going to be a dreadful mistake, and they were setting Daughter up for failure.

They had nothing to say.

Look upon me, have pity on me,
for I am alone and afflicted.

Relieve the troubles of my heart;
bring me out of my distress.
Look upon my affliction and suffering;
take away all my sins.
at December 02, 2011