My son, Chewbacca or Why Wookies Need Moms, Too 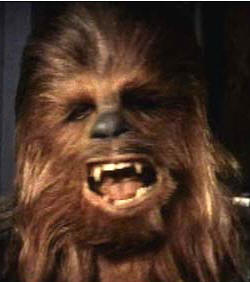 I am the mother of a Wookie.

If you're not a Star Wars fan, a Wookie is a 7 foot tall, fur-covered, grunting, technologically-adept, devoted beast.  They are great with weapons...not so great with communication.  They mostly grunt. There are conflicting reports as to what a Wookie eats, but given their size, it is a substantial amount. They don't seem to fit into the world they are in, but are making the best of it. They are a bit of a Lone Ranger - not too many of them around, and they are trying to make things work with a bunch of humans and other creatures that don't quite seem to "get" them. Here's a little bit about Wookies, from "A New Hope":

[R2-D2 and Chewbacca are playing the holographic game aboard the Millennium Falcon]
Chewbacca: Aaaaaaaaaaaaaaaarrrgh!
C-3PO: He made a fair move. Screaming about it can't help you.
Han Solo: Let him have it. It's not wise to upset a Wookiee.
C-3PO: But sir, nobody worries about upsetting a droid.
Han Solo: That's 'cause droids don't pull people's arms out of their sockets when they lose. Wookiees are known to do that.
Chewbacca: Grrf.
C-3PO: I see your point, sir. I suggest a new strategy, R2: let the Wookiee win.

Now, my son has not ripped out anyone's arm from the socket (although there have been threats against siblings...), but everything else about Wookies seems to be a pretty fair comparison to a 15 year old boy.

My boy.  He's eating everything in sight, he seems to be growing at a visible rate, he can't seem to get anyone in the house to understand him, he can defeat any video game in the universe but English class has him baffled....It is tough being a Wookie.

One might think, looking at a Wookie, that he is pretty self-sufficient.  He feeds himself, bathes himself (when necessary), is hopelessly devoted to his friends (and one pretty one female in particular), and seemingly would prefer to be left alone for the most part. But a Wookie still needs a mom.

Wookies need moms because, despite their size, they are not all grown up.  They don't have it all figured out.  Moms can help with things like vice-principals and a girl that won't return a phone call.  Moms can COOK food, not just warm stuff up.  Moms don't know how to fly the Millennium Falcon, but they can teach you how to back the car out of the driveway.

Moms also know about the really tough stuff: sex (I know - Wookies do NOT want to hear about this from their mom, but it's essential), alcohol, God, grades, what Wookies should do with the rest of their lives, whether or not Wookies should attend a dance, why Wookies need to go to church.  Moms also know why "Jersey Shore" is stupid (for everyone, not just Wookies), that Wookies are sometimes a bit afraid and embarrassed, and that Wookies sometimes need a shove in the right direction.  And moms can get away with shoving Wookies.

Star Wars is all about aliens.  And so is the world, as St. Peter reminds us: Beloved, I urge you as aliens and sojourners  to keep away from worldly desires that wage war against the soul. Maintain good conduct among the Gentiles, so that if they speak of you as evildoers, they may observe your good works and glorify God....

It's tough being a Wookie....or a mom, for that matter.  That is why it is necessary and essential that we remember that we are not of this world;  we belong to Christ.  Even the Wookies.
at March 19, 2012