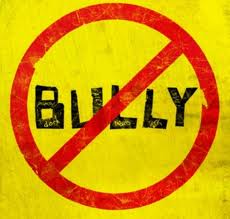 The documentary "Bully" has opened.  Thanks to some very brave kids, who allowed the pain in their lives to be made so public, I am sure that this will create a lot of buzz, and hopefully, some good.  If one kid steps up and says "Stop", or one community says "Not here", then the film will have done its job.

No one deserves to be treated with anything less than dignity and respect, because we are all children of God.  The color of one's skin, the ability of one's body or brain to function normally, one's appearance or one's sexual orientation notwithstanding, we all have the right to freedom, safety and love, even if we don't like each other.

And that goes for pro-lifers and Christians as well.

I just wanted to share with you a bit of bullying.  You know, it happens to adults too.  Oh, most adults aren't gonna harass you in open - but the internet: that's a whole different thing.

Two months ago, Dark-Haired Daughter was repeatedly sexually assaulted.  We made the decision not to give her Plan B - our "choice" for all those pro-choicers reading this.  A couple of young women (who read a blog post I wrote about this) began a Twitter campaign of bullying aimed at me:

I hope you find out what it feels like to brutally raped then have all choice taken from you.

You do not deserve to call yourself a good mother, or even a mother.

Lets hope karma bitch slaps you like you deserve.

Open your mind a little, and stop blindly following a god that doesn't exist.

There were other messages, some even more brutal.   One of these women turned our family in to Child Protective Services, telling them that I had "with-held" medical care from my daughter, and we're being investigated.

I'm a big girl, not a pre-teen on the back of the school bus getting beaten and harassed every day.  But no one deserves to be treated this way.  You may not like a pro-lifer, a right-wing conservative, a Catholic, a homeschooler, a.......you fill in the blank.  You may not like atheists or queers or people with body piercings.  But God holds each of us in the palm of His hand.  Remember that the next time you have something to say.
at April 07, 2012