"Crucify Him, crucify him!" 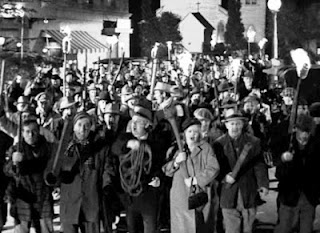 As Catholics, we begin Holy Week today, beginning with Palm Sunday.  You could take all our prayers and liturgies this week as sort of re-enactments or mere remembrances, but that would be an weak understanding.  While we of course never want to forget Christ's Sacrifice for us, Holy Week is more than "play-acting".  We enter into eternity:  His Sacrifice and Death are as much for you and me today as they were for the folks walking around Jerusalem and Galilee 2000 years ago.  He is saying "yes" to that cross for you, for me in an eternal - God's time - response to our sin and our desperate need for salvation.

Which leads us to today's Gospel.  As Catholics, we read what is called "the Passion" today - the whole story of Jesus entering Jerusalem as a hero all the way through his Crucifixion and Death.  The entire congregation takes part in this narrative.  At one point, Pontius Pilate is trying to figure out what to do, and the crowd (that's us) shouts, "Crucify Him, crucify Him!"  The hero they had just welcomed into town in glorious waving of palms has now been sentenced by a jury of his peers to death.

I would dare say that most of us don't like shouting this out.  We'd like to think we wouldn't, had we been standing in that crowd 2000 years ago.  We'd like to think we'd do anything to save our Lord and King.  But we also know that it is our sins - my very real, every day sins - that nail him to that tree.  We shout "crucify Him" with our actions every day.

The man thought to have killed Trayvon Martin has had to go into hiding, fearing his life.  No charges have even been filed, let alone guilt established.  How about the thoughts you have about the co-worker who makes you look bad in a meeting?  What about the anger you take out on a family member due to an old grudge or a new grievance?  We make snide remarks about the guy near the express way holding the sign that says, "Please help.  Hungry."  We "know" we are just a little bit better people than those folks down the street - have you seen how their kids act?  That gay guy, that woman who's admitted to an abortion, that child abuser:  crucify 'em all.  We are stingy and rude and thoughtless and sinful:  we shout "Crucify Him!" every day.

What can you do this week to change that "crucify" to "care for" or "pray for" or even "acknowledge"?  Where will you see Christ this Holy Week and choose not to be part of that mob shouting "Crucify Him"?
at April 01, 2012