May Day protests and the good of work 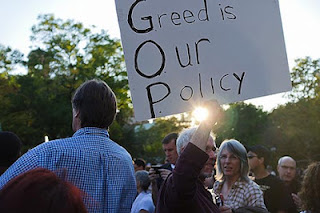 I must confess: I don't get the Occupy Wall Street folks. I especially don't get protests set for today, with the aim of shutting down cities, and render the 99% who have jobs incapable of getting to work:

"Touted as a 'day without the 99 percent,' and modeled in part on massive immigration reform protests in 2006, Occupy groups in New York, Los Angeles, the San Francisco Bay area, Chicago and more than 100 other cities will join forces with immigrant rights groups and labor unions. Organizers expect tens of thousands of supporters to swarm the streets in those cities on the anniversary of the traditional labor movement holiday.

'No work, no school ... don't bank, don't buy,' posters for the day that have been circulating around New York say. But activists are mixed on whether they expect the day of action to result in large-scale walk-offs from work, and one of the most controversial actions, a proposal to block traffic over the Golden Gate Bridge, was called off over the weekend." (Read more at Huffington Post.)

It is also the feast day of St. Joseph the Worker (funny how that happened, huh?), and Bl. John Paul II had some thoughts about work that seem appropriate for today:


The importance of work in human life demands that its meaning be known and assimilated in order to "help all people to come closer to God, the Creator and Redeemer, to participate in his salvific plan for man and the world, and to deepen...friendship with Christ in their lives, by accepting, through faith, a living participation in his threefold mission as Priest, Prophet and King."

What is crucially important here is the sanctification of daily life, a sanctification which each person must acquire according to his or her own state, and one which can be promoted according to a model accessible to all people: "St. Joseph is the model of those humble ones that Christianity raises up to great destinies;...he is the proof that in order to be a good and genuine follower of Christ, there is no need of great things-it is enough to have the common, simple and human virtues, but they need to be true and authentic." (Redemptoris Custos)
at May 01, 2012