Parenting a Teenager? Don't do these things. 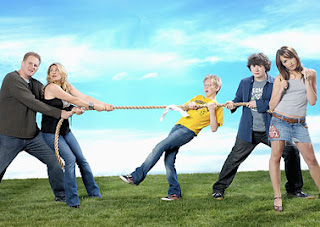 1. Don't stop hugging and kissing them. They may protest, but don't stop. They need the affection. If they don't get it from you, they WILL seek it elsewhere.
2. Don't assume they are going to be where they say they are. Be that annoying parent that checks up, drops in, calls the other parent to confirm plans. Your teen will hate it, but that's okay.
3. Don't give them approval for stupid stuff. Don't say "It's okay to drink alcohol as long as you're at home and not driving." No, it's not. It's illegal. It's unhealthy. It also gives the impression (accurately) that you really don't care what they do as long as there aren't consequences you have to deal with.
4. Speaking of which, don't back off on consequences. If you tell her she's grounded for two weeks, and she makes your life a living H&^* so you're tempted to shorten that just to get her out of the house, don't. She'll know that from then on, she can play you. And she'll be right.
5. Don't be a friend. It's okay to have fun, enjoy each other's company and be nice, but you're not the friend. He has lots of friends. He needs a mom and dad, not another pal.
6. Don't skimp on manners. Insist that your young man holds the door for you, uses the right utensil, says "please" and "thank you". Make sure your young lady knows how to order in a nice restaurant, get in and out of a car wearing a skirt, and be respectful of elders. Not only will this serve them well in life, their future boss will thank you for it.
7. Don't do everything for them. They need to know how to make an appointment for themselves, take the heat for a missed assignment, complain (nicely) about shoddy service and get their money back. Help them grow a backbone.
8. Don't cook for them all the time. Every kid should know how to cook a decent meal (not just warm stuff up). Even if it's spaghetti, salad and bread, your teen should be able to put a respectable meal on the table. Future dates will thank you for this one.
9. Don't put down their friends. Even if you don't like that friend, make that snotty kid feel welcome as the Pope in your home. In fact, insist that they hang out at your place. You can keep on eye on things there.
10. Don't let religion slide, but don't fight with them when they question the Faith. It is NORMAL (do you hear me: NORMAL!!) for young people to start wondering why they believe what they do. DO NOT PANIC and DO NOT FIGHT. Answer. Give them some books to read. Find allies like youth ministers and grand parents. If you let them know it's okay to ask, they will. If you fight with them, you've already lost the battle.
at May 17, 2012