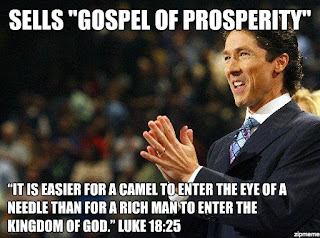 Read this from Chuck Queen at Ethics Daily, focusing on one of the big names in this arena, Joel Osteen:

...his [Olsteen's] emphasis on personal success seems to fly in the face of the gospel of Jesus in the Gospels.He writes: "If you will keep the right attitude, God will take all your disappointments, broken dreams, the hurts and pains, and He'll add up all the trouble and sorrow that's been inflicted upon you, and He will pay you back with twice as much peace, joy, happiness and success ... If you just believe, if you'll put your trust and confidence in God, He will give you double for your trouble."


Really, Brother Joel, double for my trouble? Is that what Jesus says?


This type of theological thinking isn't just bad, it's heretical, and therefore dangerous.

You see, there are a lot of people out there like my sister. On Sunday, she sat down with me, my brother and my mom and unloaded. She's been carrying a heavy burden, and it's getting heavier daily. She's had on-going chronic pain issues that have not gotten better over the past year, she's got an aging mother-in-law with dementia that she's been caring for, two daughters with their own health issues, and a granddaughter with severe learning disabilities. Add on top of that the huge financial concerns she has and well....she's had it.

And what does Olsteen offer:  "You, my dear, just don't have the right attitude. You're not believing enough (or in the right way). You're not confident enough in God. This is really all on you."

Here I was thinking that Jesus told us to pick up our CROSS and follow Him. That we could expect to be PERSECUTED for following Him. And that the way to Heaven was a mighty narrow one. I don't remember Him ever telling us that he'd double our money if we bet on Him.

There is an entire group of people that really would have a hard time with Mr. Olsteen's rendition of Christianity. They are called martyrs. Everyone from John the Baptist to Agatha to Miguel Pro to Maximilian Kolbe to Jean Donovan know something Mr. Olsteen doesn't: that we are not called to a life free of troubles, but we are called to a life of faith - DESPITE the troubles. Jesus isn't some Magic Doctor in the Sky, there to remove all pain via Christianized Codeine. If that were the case, why the heck did Jesus suffer and die on the Cross? He did it to remove the sting of death and the eternal damnation sin would bring upon us, but also to model how WE are to handle suffering: with faith.

Please Mr. Olsteen, stop this nonsense. It's untrue and it hurts. It hurts people like my sister, who are trying to remain faithful to God in times of doubt, stress and pain. Just stop.