Should we boycott everyone we disagree with? 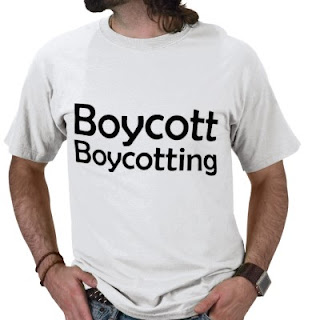 There is a town not far from where we live that is known for its outstanding food, fun shops, art culture and great beaches. You will also find, if you wander the streets, a number of business that fly a rainbow flag, signifying support for gay culture. My husband and I like to go there once in awhile.

I live in a rather small, town - typical Midwest. I bank at a local establishment, pick up my prescriptions from a locally-owned pharmacy, my paint from the locally-owned hardware store. We rely on a volunteer fire department for our safety. My husband and I eat dinner frequently at local restaurants; one in particular is a favorite.

When I go to these places, I never ask the owners who they voted for in the last election. I don't wish to hear their stance on birth control. I don't ask them their marital status, or if they are living with someone. I don't enquire about their views on gun control, the war in Iraq, Chik-Fil-A, electric cars, recycling, adoption, the state budget, whether Martin Luther was right, if they believe in transubstantiation or consubstantiation, if they think putting elderly parents in nursing homes is morally evil, or if the moon landing was a government hoax.

Maybe I should. But I don't.

Do we really want to live in a country where we boycott everyone we disagree with? If this is the case, I am pretty sure I would be down to one or two Facebook friends, my own kids would have to move out of the house and most of my family would be forced to cut ties. I have deep, abiding, long friendships with dear, good people and we vehemently disagree on big issues. Should I cut ties with them?

There is no Chik-Fil-A in my area, but I'd probably eat there if there was. And I'd eat at the restaurant down the street owned by the gay couple, if the food was good and the prices were decent, so long as they didn't toss me out for being against gay marriage.

I don't want to live in a world where I have to boycott everyone I disagree with. I don't want to spend my time arguing with every single person I meet, nor do I wish to have relationships with only those people who agree with me 100% of the time on 100% of the issues facing us as a culture and as a nation. I do want to have civil discourse in appropriate places at appropriate times in appropriate ways. I do want to be loving, kind, considerate and give the benefit of the doubt to those folks that cross my path, and those that stay in my crazy life. Pardon me for not boycotting. Where would it end?
at July 30, 2012