Untangling the knots in my soul 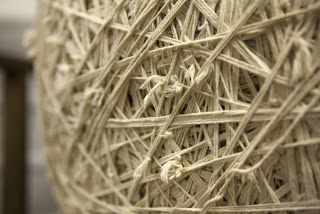 Going through therapy for depression is like untangling a vast, knotted ball of string. There are so many things to pull and tug, fidget with, frustrate one's self with. My counselor (a wise Franciscan Sister) reminded me last night: it is easiest to untangle a knot when there is slack in the string. The more tension we place in the string, the tighter the knot becomes, and thus, the harder it is to untangle.

One of the knots I struggle with is my continuing struggle to pray. Don't get me wrong: I pray every day, but mostly I am saying my prayers, and not praying my prayers. God is silent for me, and distant it seems.

My boss gave me an assignment on Friday that has to do with selling a book. It is a rather daunting task, with a very tight timeline and I'm a bit stressed over it. Yesterday, I decided to see who was the patron saint of book sellers, in the hopes of garnering some Heavenly help. Lo and behold: it is St. John of the Cross. If you're not familiar with him, he is a Doctor of the Church and the author of The Dark Night of the Soul, considered a Christian classic. It's about the soul's journey through the "dark night" of purgation - the stripping away - of all that is not of God, in order to reach a place of union with God.

Bl. John Paul II, as a doctoral student, wrote his dissertation on this piece, so he was quite familiar with St. John's struggle. Here's just a bit of what the former Pope had to say:


Our age speaks of the silence or absence of God. It has known so many calamities, so much suffering inflicted by wars and by the destruction of so many innocent beings. The term dark night is now used of all of life and not just of a phase of the spiritual journey. The Saint's doctrine is now invoked in response to this unfathomable mystery of human suffering.

I refer to this specific world of suffering about which I spoke in the Apostolic   Exhortation Salvifici Doloris. Physical, moral and spiritual suffering, like   sickness—like the plagues of hunger, like war, injustice, solitude, the lack of  meaning in life, the very fragility of human existence, the sorrowful knowledge of sin, the seeming absence of God—are for the believer all purifying experiences which might be called night of faith.

"The very fragility of human existence, the sorrowful knowledge of sin, the seeming absence of God—are for the believer all purifying experiences which might be called night of faith" - what an exquisite explanation of the suffering of the soul as it yearns its way towards God. My goal is to try and let that yearning happen as God wishes, not as I do. The more I tug and pull, stretch and fidget, the further away I seem to get - because I want it on my terms. I need to relax, and allow God to untangle the knots in my soul.