Tales of Woe from the Catechetical Front 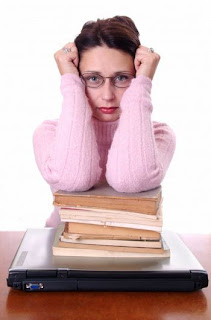 I have a feeling this may be an on-going series throughout the year. Friday night, a friend of mine called, rather distraught. She's a really good religion teacher, has years of experience teaching religion in Catholic high schools, and truly loves the Old Testament. She's incredibly frustrated that she now has to teach (to high school freshmen, mind you) the entire Old and New Testament in ONE SEMESTER. Impossible. But that's the standard.

I have volunteered to teach 7th grade catechism this year at a local church. We are covering prayer and the sacraments. We meet every other week for two hours. Yeah.

First class last night: I tried my darndest to get the kids to come up with the story of Moses when talking about the idea of "covenant". "What did God ask Moses to do?" Silence. "It had something to do with the number 10....?" Silence. I finally dragged it out of them.

I know that these kids must have been taught some of this stuff previously and it just hasn't stuck for one reason or another. I also know that a lot of these kids don't attend Mass with any regularity, so talking about sacraments is going to be a tough one. (The last Baptism some of them "witnessed" was their own...)

It isn't supposed to be this way. As educators, our job is to reinforce what is being joyfully lived and taught at home. We are supposed to help the kids dig deeper into Scripture and the faith and help them love it. Instead, we're caught up in hardcore curriculums, deadlines on what is being taught and when, and kids who literally have no idea what we're talking about.