Heading off on a little trip, and possibly an abortion 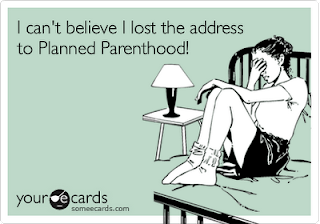 Last night, I was using Google maps to locate a hotel for a brief trip Dear Husband I have to make. I found a couple of likely spots and typed the address of one into Google maps to see if the location was suitable.

The hotel came up with that familiar red balloon, along with major roads, parks.....and Planned Parenthood. Yup, that's right. Google wants to make sure that I know where to get an abortion on a weekend getaway. They didn't point out historical landmarks, the local library or other major points of interest, but I know where to get an abortion between a trip to the mall and a quick dip in the hotel pool.

It's an open secret that Google is a huge financial backer of Obama's and it's no secret that Obama has a mutual love affair with Planned Parenthood.

Disclaimer: this story is about my nephew. I'd love him no matter what, but he's really remarkable.

Wherein I "rip-off" another writer. Not taking credit, just sharing good stuff. Today's choice is from "Faith" magazine of the Diocese of Saginaw:

Trust me: you'll want to read the rest of the story.

We received devastating news from a dear friend yesterday, that her husband of 27 years had died. He'd always been so healthy, and now he is gone. We've been friends with this couple since our college days, and we are heartbroken for the family. My head is in a fog, and I can't seem to get much of anything done in any orderly fashion.

There is so little to do at a time like this except pray. I don't why I'm surprised, but the Holy Spirit always seems to find a way to sneak in the most perfect prayers when I need them most. Today's reading from the morning prayer in Magnificat was from Ephesians:

But God, who is rich in mercy, because of the great love he had for us, even when we were dead in our transgressions, brought us to life with Chris (by grace you have been saved), raised us up with him, and seated us with him in the heavens in Christ Jesus, that in the ages to come he might show the immeasurable riches of his grace in his kindness to us in Christ Jesus For by grace you have been saved through faith, and this is not from you; it is the gift of God it is not from works, so no one may boast. For we are his handiwork, created in Christ Jesus for the good works that God has prepared in advance, that we should live in them.

May the souls of all the faithful departed rest in peace.
at November 27, 2012 No comments:

From a drawing for a $25 Amazon gift card!

Permanent Film Exhibit at the Basilica of St. Francis of Assisi

From Rome Reports: "Visitors to the Basilica of St. Francis of Assisi will find themselves with a new, high-tech exhibit featuring the life of the saint, as well as the cultural and artistic riches in Assisi. The first of its kind exhibit is called the Franciscan Media Library, and is located in the lower basilica.


Visitors will be able to learn more about the life of the saint and the history of the Franciscan Order. It will feature three large multimedia rooms, five interactive stands, two large screens measuring 32 feet squared each, three touch and one 3-D screen.

Most valuable, however, are the contents. The library has more than 1,000 images, 700 digitized historical records, and digital reproductions of the basilicas' art, such as the Giotto frescoes. In addition, it will also screen documentaries on the life of St. Francis, and the daily lives of his friars.

After an impressive visit through the city, the new media library will allow visitors to take a no less impressive virtual tour of Assisi's history."
at November 26, 2012 No comments: 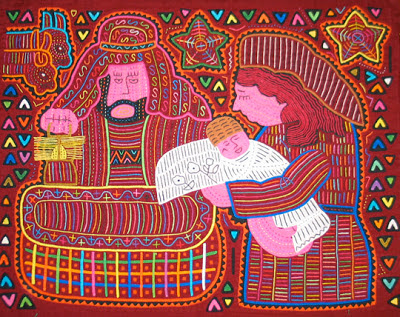 I don't know the artist, but here is a description of this type of art:

It is from the "San Blas Islands off Panama. Displayed will be 40 molas — colorful panels of reversed embroidery applied to blouses worn by the women of the Cuna tribe....Molas are derived from the older cultural practice of body painting. After Spanish colonization and contact with missionaries, the Cuna started to transfer their traditional geometric designs to fabric, first by painting directly on the fabric and later by using the technique of reverse application."
at November 26, 2012 No comments: