Are you afraid I'll become a Muslim? 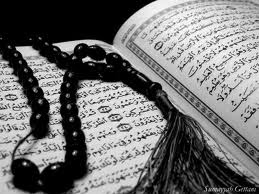 When I announced, as a college freshman, that I was going to major in world religions, a certain family member was aghast. He was completely against the idea, stating that I belonged to the one, true Faith (I knew that), and why in the world would anyone want to study anything BUT that?

Then, just for fun, I went on to get a Master's in world religions.

Is there any good reason for a Catholic to study other religions, especially non-Christian religions? I've always believed so, and now the likes of Peter Kreeft agree, in this blog post from Fr. David J. Endres:


As I began teaching the course, the reason behind offering a world religions course to Catholic young adults became more apparent: to help them understand Christian Catholic distinctiveness, what separates our faith from others. By studying other traditions, we attempted to highlight the “what” and “why” of our own beliefs, growing in our appreciation of what it means to be a follower of Christ.

When we studied Islam, we delved into the passages in the Qur’an that mention Jesus, the Blessed Virgin Mary, and various other prophets and holy men and women significant to Christians.  We probed the text to see what exactly these non-Christians believed about them and contrasted that with what we believe. For instance, if Jesus is viewed as a prophet within Islam, why do Catholic Christians teach that he is not a prophet, but the Son of God? If Muslims believe that Jesus did not die on the cross, why do Catholic Christians believe that, not only did Jesus die on the cross, but that his willingness to be crucified makes salvation possible?  These are among the questions that were discussed to bring greater focus to what we as Christians believe....

As I often stated in class, the purpose of studying world religions is not to pick one that sounds interesting and convert. As long as religious education presents the Christian faith in a way that is compelling and unapologetic—as True—there should not be a reason to fear studies in comparative religion.

While other religions may appear interesting or exotic, there have been no conversions among my students, nor do I suspect that in the future any will convert to Buddhism, Hinduism, or Islam. However, I do hope that many of them have a better understanding of their own faith from learning about the beliefs of others.  It is my sincere hope that each of my students comes away with a better appreciation of what makes Christianity distinctive and, ultimately, true: that Christ is the way, the truth, and the life, and no one comes to the Father except through him (Jn 14:6).