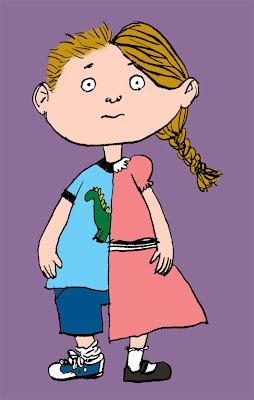 Do you know what "LGBTQIA" means? It's a cumbersome new term meant to include every form of sexual identity questioning (although, hold on, more may be coming!). According to the New York Times: "'Q' can mean 'questioning' or 'queer,' an umbrella term itself, formerly derogatory before it was appropriated by gay activists in the 1990s. 'I' is for 'intersex,' someone whose anatomy is not exclusively male or female. And 'A' stands for 'ally' (a friend of the cause) or 'asexual,' characterized by the absence of sexual attraction."

It's apparently becoming popular on college campuses, where of course, young minds are eager to show how open they are to such things. George Neumayr at Real Clear Religion:

Another student saw herself as "agender," prefers the pronoun "they" to he or she, and now just sees herself as an "amorphous blob."

These poor kids. No one ever told them, really told them, that they are fearfully and wonderfully made. "An amorphous blob"? My heart aches. Can you only imagine the pain that soul is in?

Our society spends so much time telling us how to create ourselves: makeover shows, products to reduce or increase this or that, surgery to change whatever you don't like or want more of, motivational books and speakers that promise to bring vast riches to you if you only want to attract it. We begin to think that we are our own creations.

It's nothing new. Walt Whitman was a fan of this philosophy:

It will likely take us centuries to glean all there is from Bl. John Paul's Theology of the Body, but he certainly knew better than to fall for our current society's vision of self-creation and body confusion.


The specific subject of the text in question is the theology of the Church as the Body of Christ. However, in connection with this passage it can be said that Paul, by means of his great ecclesiological analogy (which recurs in other letters, and which we will take up again in due time), contributes, at the same time, to deepening the theology of the body. While in First Thessalonians he writes about control of the body in holiness and honour , in the passage now quoted from First Corinthians he wishes to show this human body as worthy of honour . It could also be said that he wishes to teach the receivers of his letter the correct concept of the human body.
Therefore, this Pauline description of the human body in First Corinthians seems to be closely connected with the recommendations of the First Letter to the Thessalonians: "...that each one of you know how to control his own body in holiness and honour " (1 Th 4:4). This is an important thread, perhaps the essential one, of the Pauline doctrine on purity.

I hope someone can share with the young woman who feels herself to be an "amorphous blob" that her body is honorable, holy  and good. Good news truly, for a world that is lost in a muddled alphabetical mess.