The Truth Behind the "Magdalen Laundries" 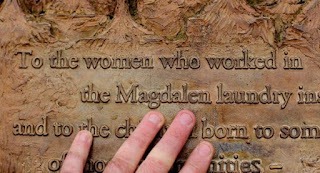 During the middle of the 20th century, the Magdalen Laundries became a place of infamy in Ireland. Young women "in trouble" were sent there to work out their penance for their sexual sins, forced to perform menial tasks (such as laundry) and beaten by perverse nuns who sadistically tortured these young women.

Except it didn't happen.

According to Brendan O'Neill (an atheist, by the way) of  The Telegraph UK, it is time to set the record straight:


In the Irish mind, and in the minds of everyone else who has seen or read one of the many films, plays and books about the Magdalene laundries, these were horrific institutions brimming with violence and overseen by sadistic, pervy nuns. Yet the McAleese Report found not a single incident of sexual abuse by a nun in a Magdalene laundry. Not one. Also, the vast majority of its interviewees said they were never physically punished in the laundries. As one woman said, "It has shocked me to read in papers that we were beat and our heads shaved and that we were badly treated by the nuns… I was not touched by any nun and I never saw anyone touched." The small number of cases of corporal punishment reported to McAleese consisted of the kind of thing that happened in many normal schools in the 1960s, 70s and 80s: being caned on the legs or rapped on the knuckles. The authors of the McAleese Report, having like the rest of us imbibed the popular image of the Magdalene laundries as nun-run concentration camps, seem to have been taken aback by "the number of women who spoke positively about the nuns".
And yet, despite the fact that the McAleese Report has utterly exploded the popular view of these laundries, some are wondering out loud if it was nonetheless legitimate and good to have produced so many embellished stories about evil nuns in recent years, as a way of highlighting the broader culture of abuse in the Catholic Church. As The Irish Times ponders: "Are factual inaccuracies in movies justified by role in highlighting issues?" The Times cites campaigners for justice who believe that "the role such [movies and books] played in highlighting the issue justified any artistic embellishment". A playwright told the paper that even if these portrayals of laundry life were exaggerated, they "served an important function at the time" – that is, to raise awareness about the problem of abuse in Catholic life more broadly.

Nice to know that so many good names were ruined in the name of "artistic license".