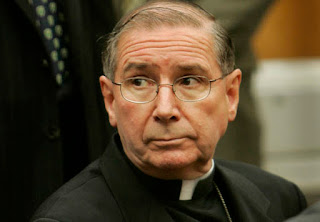 I haven't written much about the sex-abuse scandal, mostly because it's too painful and a lot of ink has already been spilled. But this - from Rod Dreher at American Conservative - frosted me this morning:

First, I think we have to always remember that priests are in the business of forgiving sins. It’s a constant in pastoral life, whether in the confessional or not, that people tell you things they’ve done wrong, and reveal their dark sides to you. You learn to suppress your judgement, and always to offer hope and the possibility of a new beginning. If, as a priest, a layman came to me as a sex offender of the most horrible kind, I would swallow my disgust, and try to find some way to help him move forward. It’s part of the job description.

I think this dynamic is at work in bishops dealing with priest offenders. They have in front of them someone who, for all the rotten things he’s done, is still a broken child of God.

The second factor that’s important is that priests generally don’t grasp the seriousness of the offense, and the damage it does. We see this in Cardinal Mahony, but it’s not just him. I wish I knew why this was so. It seems to me common sense that assaulting children sexually or otherwise damages them.
The attitude lingers, largely, because even now most clerics haven’t heard a victim’s story. I was revolted by these things from the first moment I heard of them, but it wasn’t until I dealt with a victim that my reaction became visceral. Abp. Myers probably hasn’t had a real conversation with a victim, or a victim’s parent, and so the damage done is still abstract.

It’s a matter of proximity. A broken priest directly in front of you vs. a victim who you perceive as somebody who’s just angry and demanding, but not somebody you have daily contact with.

To which I reply: Oh, REALLY? Try to help an offending priest "move forward"? Would that include turning himself into the authorities and removing him immediately from his priestly duties? And Cardinal Mahoney isn't grasping the "seriousness" of the offense? Again: Oh, REALLY?? Sex abuse doesn't register as serious. And trust me, there is no such thing as damage done "in the abstract" and any priest who has spent more than five minutes hearing confessions knows that.