What do you do when you don't know what to do? Pray. 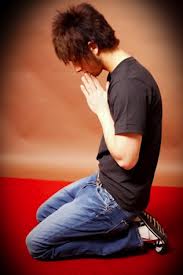 Faithful readers know that my catechetical adventures this year have been a struggle. The kids - no matter what I've tried - are "bored". They find everything "too hard". Games are fine, so long as they don't actually have to know anything. Musical chairs was suggested to me by a student, as opposed to a catechetical trivia game. The most excitement I get is when I let one of them leave to go to the bathroom.

Two weeks ago, I gave them a quiz: list the seven sacraments. We had spent the entire class prior learning these. Mind you, these are 7th graders who have all received at least three of the sacraments, and are preparing for a fourth. Only two kids out of sixteen got all of them; most of the students turned in blank papers.

What do you do when you don't know what to do? Pray. So, I hit my knees.

I knew I needed to rattle them. Shake them up. Let them know that this wasn't some boring stuff they had to learn so they could get that oil on the forehead and be done with all this boring Church stuff.

God is good. He led me to a friend of a friend, who happens to be a near-by youth minister. She brought in some of her core team last night to evangelize.

The skit they started with was a powerful one. A young man, in line for confession, is telling his friend that he doesn't really care about confession; his mom is making him go. He doesn't really believe in this stuff, and he hates telling his sins to some priest he's going to judge him. So he and his friend devise a plan that he will simply make up a bunch of sins: stealing an old man's walker, spitting on food at the hamburger joint where he works, etc.

He heads in to the confessional, and starts to rattle off his "sins". The priest catches on, and before he will give the young man absolution, tells him he must go kneel in front of the crucifix and tell Jesus: "You died for my sins, and I don't give a damn."

Humbled, he walks back to the confessional, makes a good confession and receives absolution.