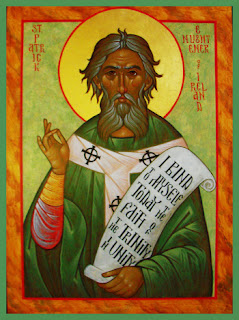 Wherein I "rip-off" another writer on the web. Not taking credit, just sharing good stuff. Today's choice is Philip Jenkins, who thinks that green beer as a remembrance of the great St. Patrick is an abomination of the message of the Gospel:

With all the patience at his command -- which was not immense -- Patrick told his critics about his extraordinary labors in a frightening and often dangerous pagan society, while they were living comfortably. He also stressed the practical realities of operating in this very different kind of emerging Christian society, where gift-giving was a standard part of life. Had he made gifts to influential leaders? He certainly had, and would do so again. I may be ignorant and unlearned, he says, but in winning this country, never doubt that I am doing God's will.

The defensive tone of the Confession is utterly lacking in Patrick's other surviving text, his Letter to the Soldiers of Coroticus. After years of struggle, Patrick had won many Irish for Christ -- not the overnight conversion of popular mythology, but more than enough to be proud of. Suddenly, though, the ruthless soldiers of the British king Coroticus attacked these Christian settlements, and right after a mass baptism ceremony. Patrick's fury is easy enough to understand, all the more so when we recall his own history. He knew at first hand what it was like to see your homeland devastated by soldiers, and to be carried off into slavery. Everywhere he looked in Ireland, he saw enslaved Christian women who had been seized from their British homes. But these latest horrors were the work of men who claimed to be Roman and Christian....

Patrick had probably never heard of St. Augustine, who lived a generation before his time, but the questions he was asking would have been familiar to the African saint. How could a state or a king boast of Christianity, if their every action betrayed the faith, if they showed neither mercy nor charity, even to fellow believers? If Coroticus did not live according to the church and its laws, then he was worse than a pagan, worse than a savage. His was not the City of God but the City of Hell. Christian kingship -- Roman kingship -- was a title that had to be earned. Christians? No, they were "rebels against Christ."

As for the murdered Irish Christians, they would dwell in Paradise, and "rule over wicked kings."
This March 17, then, forget the snakes and the green beer. Think of the prophetic Christian leader who demanded that rulers live up to the faith they professed, and who had no hesitation in damning violent oppressors to Hell.