Are we holding the Sacraments hostage? 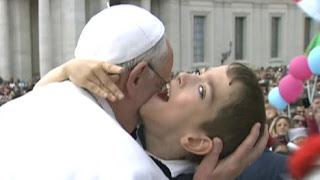 Pope Francis seems to think so:

The child has no responsibility for the marital state of its parents. And then, the baptism of children often becomes a new beginning for parents. Usually there is a little catechesis before baptism, about an hour, then a mystagogic catechesis during liturgy. Then, the priests and laity go to visit these families to continue with their post-baptismal pastoral. And it often happens that parents, who were not married in Church, maybe ask to come before the altar to celebrate the sacrament of marriage.

Blogger Taylor Marshall goes on to say that he himself has "become discouraged how in the United States, the sacraments are 'held hostage' by local parish hierarchies." Our family has had a taste of this ourselves.

Dark-haired daughter has wanted to become confirmed. Bear in mind that, at the age of 17, she functions at about the 8-10 year old range cognitively, and has bipolar disorder. This, combined with many hospitalizations, made her formal catechetical training spotty. Despite this, we taught her as well as we could at home, formally and informally, and she loves her church and her faith. She desires to be a full member of the Catholic Church. Something stood in the way: a set of arbitrary rules mandated by a person wielding far more power than they should have.

We were told that Daughter would have to go through the 2 year Confirmation prep. program with the 7th and 8th graders in our parish. Besides being embarrassing and demeaning to her, Daughter really would not be able to keep up with and comprehend the work at that level. It was not a good solution, but we were told it was the only one.

So, I got creative. Let's just say that next week, Dark-Haired Daughter will be confirmed in the Catholic Church, with great joy on her part and a bit of sleight-of-hand on mine. It's not the way I would have liked to do it, as she will not be confirmed with our parish, but another one....but I think Pope Francis would approve. No one should have the sacraments held hostage from them.