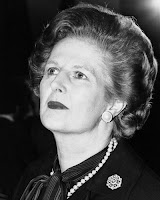 England buried the "Iron Lady" this week, undoubtedly the most powerful female politician of the 20th century. Although Margaret Thatcher was known for her demanding ways, an unwillingness to bend politically and even a harshness in her personal life, she had a deep Christian faith (she was raised Methodist). Here are a few words from an interview she gave some years ago:

Christianity is about more than doing good works. It is a deep faith which expresses itself in your relationship to God. It is a sanctity, and no politician is entitled to take that away from you or to have what I call corporate State activities which only look at interests as a whole.

So, you’ve got this double thing which you must aim for in religion, to work to really know your faith and to work it out in everyday life. You can’t separate one from the other. Good works are not enough because it would be like trying to cut a flower from its root; the flower would soon die because there would be nothing to revive it.