I had something else planned to post today - and I may still get to it - but I ran across this blog and wonderful art/post that I just had to share: Biblische Ausbildung.

My student Grace King brought this painting to our attention as we studied Psalm 23 in class. The painting provoked some good comments and discussion. Now that I’ve had a chance to look at the piece more closely, I am even more intrigued by it. Johnson painted his depiction of a free black man reading Psalm 23 the year that Lincoln’s Emancipation Proclamation went into full effect. At a basic level, the young man’s literacy is a powerful statement of black inclusion in an emerging new America. Probing deeper, there is a powerful interpretation of Psalm 23 here. 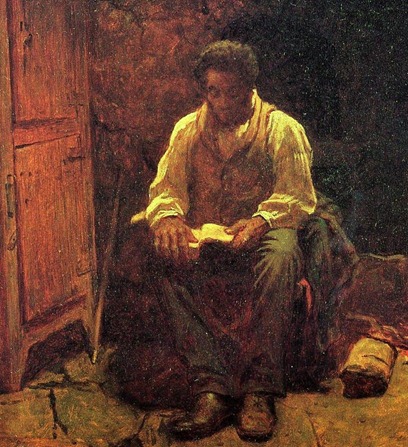 Psalm 23 occurs in the middle of the Bible, but Johnson’s figure is reading the front of the Bible, the Book of Exodus (see image detail below). The artwork is thus suggesting that Psalm 23 is not the calm, individual-oriented poem that most people assume. Psalm 23 is about God vigorously leading an entire flock, as all shepherds do, not merely a private soul. Allusions to the Exodus story in the psalm convey a message of this-worldly liberation: “Let my people Go!” 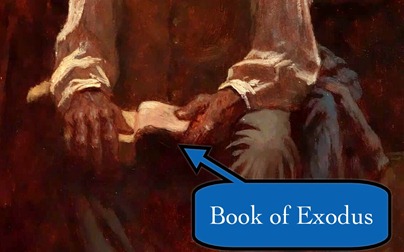 The Hebrew clause "I shall lack nothing" in v. 1 of Psalm 23 recalls God's care in the exodus journey: "These forty years the Lord your God has been with you; you have lacked nothing." (Deut 2:7). The Hebrew verb for "lead" or "guide" in v. 3 of the psalm is used in a metaphor of God shepherding Israel out of Egypt to freedom in Psalm 78:52-53 (cf. Ex 13:21): “Then he led out his people like sheep, and guided them in the wilderness like a flock. He led them in safety so that they were not afraid. . . . And he brought them to his holy hill.” As J. Severino Croatto has noted, the Hebrew behind v. 3b’s “paths of righteousness” (KJV) can equally be translated as “paths of liberation.” 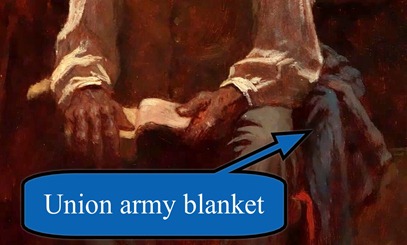 So the painting correctly captures how Psalm 23 is about the individual joining with an entire flock being led by God out of slavery! Such joining in God’s work of liberation may even entail taking up God’s cause of liberation into your own hands. As the detail immediately above reveals, the young man here has a Union army blanket. Has he joined with the soldiers in taking up arms against the Confederacy?

Email ThisBlogThis!Share to TwitterShare to FacebookShare to Pinterest
Labels: art, faith, other blogs