Total Rip-off Tuesday: I have no idea what to make of this....

Paul Roorda haunts flea markets, thrift shops and eBay, looking for Bibles no one wants any more.
When he gets them, he often burns them. If he doesn’t do that, he might drive a nail through the pages, so they can’t be opened. Other times, he’ll cut each page into strips, then fold those into tiny scrolls and place them into gelatin capsules.

While this may sound like someone who has gone over the edge with sacrilege, Mr. Roorda is an acclaimed artist. His bold, thought-provoking sculptures and mixed-media collages—made from discarded Bibles—are currently on display at Wesley Theological Seminary’s Dadian Gallery.
The 24 works in “Paul Roorda: Rites & Remedies” might be considered the shadow side, or at least the flip side, of the typical seminary exhibit, where rare, beautiful Bibles from centuries past are hauled out and placed under glass for straightforward admiration.

Mr. Roorda will do just anything to an old Bible, in the interest of shaking people up, and getting them to think afresh.

“I do know that it makes people uncomfortable,” he said of his approach. “I like that discomfort. That’s a big part of the intent of my work. I want to challenge people. But there’s also an acknowledgement in the work that (faith) is a difficult topic, and it’s not to be taken lightly. I hope that’s apparent in the art.” 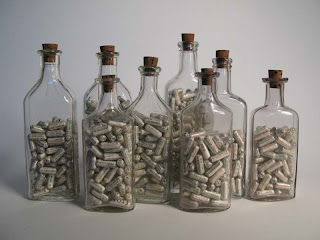