Get Your Geek On: Four Women of Middle Earth Who Reflect Mary

From the blog Into the West:

Éowyn. Daughter of Théodwyn and sister to Éomer, Éowyn was a woman who longed for battle and despised being sequestered to the “cage” that was her life. In the end it was her heroism in battle that defeated the Witch-King, where she proclaimed, “Begone, if you be not deathless! For living or dark undead, I will smite you.“ After her victory, she would eventually devote herself to “be a healer, and love all things that grow and are not barren.” Éowyn reflects that power of the Blessed Virgin Mary, who crushed the head of the serpent and is called the “Terror of Demons;” for when called upon, demons fly away from the sound of her name. Éowyn also reflects that healing power of the Blessed Virgin Mary, who is called the “Health of the Sick,” “Comfort of the Afflicted” and “Help of Christians.”

Eowyn's my favorite character, so you'll have to head over to the blog to read the rest. 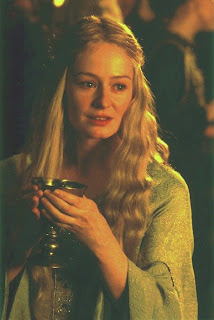