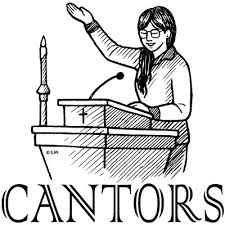 I cantor occasionally at church. I'm not great, but I'm decent. This past Sunday, however, was a train wreck. Not an "oops, I didn't hit that note" or "boy, that was a clunker" but an honest-to-goodness-start-to-finish train wreck.

I didn't get any of the music until just before Mass and had little time to practice. Two of the hymns were brand new. I blew it.

Now, I've messed up before and all is well. I did not climb in a hole and weep. But this Sunday was different. It was rather humiliating. I was supposed to be a leader of prayer and instead was a distraction.

I know part of this is my fault. I also know a big part of it was out of my control. Now I'm trying to figure out if I should continue in this role - if I'm not going to be decent at it, but rather a distraction, I shouldn't be doing it. Or am I just reacting to the embarrassment?

Was this a lesson in humility or an episode of humiliation?
at June 04, 2013