Motherhood at the bottom of a pit 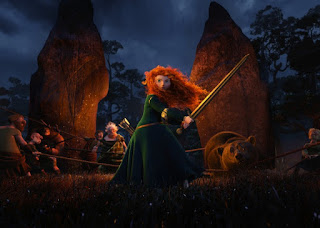 As many of you know, my Dark-haired Daughter was abducted and assaulted about 18 months ago. She continues to heal, and is doing marvelously well, thanks be to God.

About a year or so ago, I was of course wholly focused on helping her. My Curly-haired Daughter knew something was "off" with me, and repeatedly told me so. I didn't listen. I was too busy to help myself (I kept telling myself this!), and besides, my daughter needed me. Curly-haired Daughter told me I wasn't "present", I wasn't there for the rest of the family, and I wasn't there for myself. I ignored her.

Then, one night, she suggested a mom-daughter outing, to see the movie "Brave". If you're not familiar with the movie, it focuses on a young Scottish princess, Merida, who is feisty and fierce. She loves to ride and shoot, roam and scour the countryside. Her mother, the queen, is a lovely and gracious woman who is trying desperately to mold Merida into a young lady fit to serve as queen. While not meaning to, the queen is driving Merida away, and the girl rebels. She seeks a way to get mom "off her back" and casting a spell, turns mom into a bear. A bear that is hunted. Feared. At risk. Merida finds herself in the position of literally throwing herself in front of this bear-mother to save her life.

In the midst of watching this movie, I broke down. Sniveling, snotty crying. All I could think of was that I did not protect my Dark-haired Daughter - that I should have done what Merida did for her mother - throw herself in front of the danger and save her.

Rationally, of course, I knew this wasn't possible, but that movie forced something in me to the surface and all I could do was weep. Curly-haired Daughter was right: I was not "there". I was in a very deep pit, and I needed help. With the grace of God, I sought it and began a very difficult journey towards peace. (I'm not quite there yet, but I'm out of the pit.)

A friend reached out to me last night. She's trying to mother from the bottom of that pit. She's a widow and has three challenging children. Like me a year ago, she's not "there" for herself, and consequently, she's not holding it together. She wanted to know what she could possibly do next. I said to her, "You're at the bottom of a pit. Stop digging. Then, when someone throws you a rope to climb up, grab it. You keep saying you're in this pit, but you keep on digging, trying to get out. That doesn't work. Stop digging."

I spoke from experience. And it's the truth. A year ago, I was trying to get out of that pit by digging my way out, and it doesn't work. Of course, it is quite clear to me now, but at the bottom of that pit, it's dark and hard to see. Thankfully, I had a daughter who cared enough and knows me well enough to keep throwing a rope down until I had the sense to grab it.

I waited, waited for the LORD; who bent down and heard my cry,
Drew me out of the pit of destruction, out of the mud of the swamp, Set my feet upon rock, steadied my steps,
And put a new song in my mouth, a hymn to our God. Many shall look on in awe and they shall trust in the LORD. - Psalm 40:2-4