No, it's not quite the same as China. Our one-child policy is self-imposed. And the reasons parents 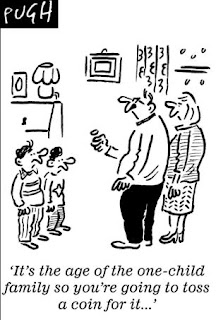 are giving are mainly financial:


“My husband and I have run the numbers front, back and sideways, and we come to the same conclusion each time: we simply can't afford another,” says Jen Wright, 34, who is raising her 4-year-old daughter, Madelyn, in Imperial, Missouri, a suburb of St. Louis. Although her work at a local credit union and her husband’s job as an ambulance mechanic bring enough to get by without government assistance, one more baby doesn’t fit into the equation.


“Not even close,” she says. “I look at pictures of when [Madelyn] was 2 and I think, ‘I’m never going to have that again.’ But now I can put money away for her college so..." Wright trails off.

We parents know it's tough to raise kids. We worry about putting food on the table, saving for college, keeping our cars together with bubble-gum and chicken wire. And if you live in a city, double the price for everything. I was feeling sort of bad for the parents in this story, until I got to THIS:


McCready, herself a parent to a 4-year-old, can relate to the sacrifice a mother would have to make to add a second: "I can't imagine having another child. What is it worth? Do I stay home and give up everything I’ve ever worked for?”

Oh, so THAT'S it. I don't want to sacrifice anything of myself for another child. Which sort of makes you feel bad for her first kid, doesn't it? "Hey honey: I'm willing to put up with you, but watch it. There's a limit."

The saddest funeral I ever attended was that of an elderly man. His wife had already died, and their middle-aged son had never married or had children. The only folks at the funeral were a few elderly family members and some of the older people from the church - maybe about 50 people total. There was no one in the family to do the readings or help distribute Communion, so as pastoral associate, I stepped in.

Contrast that to my mom, our family's matriarch. She has (at last count, and it's hard to keep up) 4 kids, 28 grandchildren, and 27 great-grandchildren (this isn't counting spouses, by the way.) We count among us newborns, one kid with autism, a psychologist, a lawyer, a former Navy Seabee, stay-at-home moms, a nun, 9 adoptees, an engineer and a bunch of Detroit Tiger fanatics. I hope my mom never once felt saddened that she had to give up anything for our tribe.
at July 17, 2013