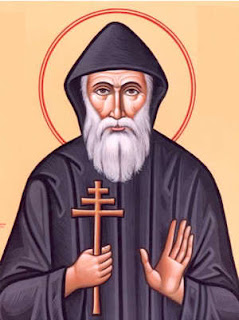 I opened my Magnificat this morning and saw that today's saint is St. Sharbel Makhluf. I didn't know a thing about him, so I thought I'd share:

On the morning of one day in the year 1851, Youssef left his parents and his village. He headed for Lady of Mayfouk monastery in the aim of becoming a monk where he spent his first preparatory year and then he went to St. Maroun’s monastery-Annaya, where he joined the Corps of the Lebanese Maronite Order, choosing the name Charbel, one of the martyrs of the second century in the Antioch Church. On the first of November in the year 1853, he revealed his monastic vows in the same monastery. He was then well informed of the precise obligations of these vows: obeying, chastity & poverty.
He continued his theological studies in the Monastery of saint Kouberyanous & Justina, Kfifan-Batroun, under the care of his teacher the saint Nehemtallah Kassab Elhardiny, who was the ideal for the monks and a living image of the great Sanctified Monks in his private & public life.
On July 23, 1859 Brother Charbel MAKHLOUF was ordained a priest in BKERKY, by pu

tting the hand of the triple-merciful Archbishop Youssef ElMarid, Vicar of the Maronite Patriarchy.


Father Charbel lived in St. Maroun’s Monastery-Annaya for a period of sixteen years. He was obedient to his superiors, sticking to his monkhood law precisely. He was ruthless on himself by living strict austerity and mortification. He denounced all worldly materials in the earthly life, to go to serve his Lord and the salvation of his soul.
During the year 1875 God inspired father Charbel to live in hermitage in St. Peter & Paul which belongs to St. Maroun’s Monastery-Annaya, in spite of the fact that the superiors usually, do not allow seclusion in the hermit easily. While the father superior was hesitating, he received a sign from heaven visualized by the miracle of the lamp. As one night, Priest Charbel asked the servant to fill the lamp with oil, but instead of oil he filled it with water. But the lamp gave light ordinarily. This miracle opened the sequence of the Charbelite’s miracles, and approached the day destined for the hermit to go to his desired secluded home.
On Feb. 15, 1875 priest Charbel moved definitively to the Hermit, where he was the ideal as a saint and a hermit, spending his time in silence, prayer, worship and manual labor in the fields. He never left the Hermit except in a permission of his superior. He followed the life path of the Saints hermit fathers, kneeling on a dish of canes in front of the Eucharist, whispering to it and inebriate by it throughout the nights.
He spent 23 years in the hermit, dedicating himself to the service of his Lord, applying the rules of hermits with precision and full consciousness.
During the holy ceremony on December 16, 1898 he was struck by hemiplegia, and entered in a duel with the illness which remained for 8 days, during which he endured the terrible pains of struggle with death calmly, silently in spite of the severe aches. In his struggle Father Charbel continued his prayers which he could not finish in the mass: “Father of righteousness, here is Your son a pleasing sacrifice!...” he would repeat as well the names of Jesus & Mary St Joseph and Peter & Paul the Patron Saints of the hermit
The spirit of St Charbel flew free, liberated going back to the dwelling of the Lord, just like the return of the drop of dew to the wider ocean, on the 24th of December 1898, on Christmas Eve. He was buried in the burial area of St Maroun’s Monastery- Annaya.
at July 24, 2013