The joy of work is for everyone 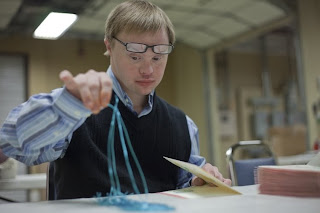 I used to take a route to work that took me past a house where a group of special needs men lived. They would be out every morning as I passed by, waiting for the bus to come and pick them up and take them to work. It's a program we have in our area for special needs folks; they spend the day doing directed work and recreation.

One of the men was always coming his hair over and over, making sure it was just right. Another stood on the porch, rocking back and forth. One enthusiastically waved at trucks, and one sat in a chair, completely disengaged from his surroundings. It was clear that they had different levels of disability, even by a passer-by, but off to work they went, every day.

With a special needs child who turns 18 soon, Dear Husband and I are pondering (with her input) about her next steps. Does she remain at home for now? Does she want to look at group homes? What type of job training might work for her? If something happens to both me and my husband, who will be her guardian?

I work with a lot of really smart people, and one of them, Jordan Ballor, wrote this piece about disabilities and stewardship.  He said a lot of things I'd like to say but far more eloquently:

There’s a dangerous tendency in America today to view disabilities of various kinds as insuperable barriers to productive and loving service. There is often an implicit, and sometimes explicit, disrespect of a basic feature of human dignity in the treatment of those with disabilities as merely passive recipients of government aid, the objects of public pity. The reality is that each one of us, created in the image of God, has the capacity to be a productive steward of some kind, and this reality has the potential to reshape our personal perspectives as well as our public policy...

But what about those who cannot work? Perhaps it is because of some injury or disability that has developed that they can no longer work, or at least not in a way that they did previously. Part of the answer lies in expanding what our idea of “work” is. Work is, at its core, the service that we do to others. Commonly this service is remunerated; we are paid for our daily work on the job. But there are innumerable forms of service for which we are not paid. This too is work. So in this sense someone on the factory line works just as the parent who changes a diaper works. This is why careful discussions about work often distinguish between “waged” work and unpaid work, or work inside or outside the home.

DeKoster and Berghoef go on to observe that “the forms of work are countless, but the typical one is work with the hands.” This idea of the basic nature of such “hand” work comes through in terms like manufacturing, which has its roots in the Latin for “made by hand.” Indeed, we often still associate work of the hands with specialty goods, craftsmanship, and quality. But again, what about those who aren’t able to work with their hands? Is there a way for them to continue to serve others as good stewards through their work?

My daughter, just like those men who waited patiently every morning for their bus, has value. She doesn't have to "do" anything to make her valuable, but she does have something to contribute in the way Jordan speaks of here....she can work. She can add value to society with her skills, her knowledge, her talents...even if those are more limited than most others'. And that is a gift to all of us.
at August 08, 2013