"These are NOT the best years of your life" 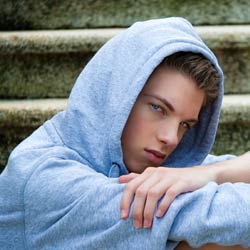 I hated high school. Pure and simple. I felt ugly, never really had a date, didn't get asked to prom, was definitely not a "popular" kid. Never played sports, was much more into writing, reading, the drama club. Nerd. "Seventeen" magazine had glossy pictures of lovely girls who seemed to have nothing in common with me but that was the standard.

While I escaped those years relatively unscathed (but it took a lot of writing, listening to music, and weeping), I still remember how much it (my mom hates this word, but...) sucked. I felt stifled, overlooked, unimportant.

On the flip side, I knew I was smart. I knew there was stuff out there waiting for me to accomplish, people I could relate to. They just weren't in my small town. Not that I was completely friendless, but it was still a painful time.

Dear Husband and I were talking about Youngest Son this weekend. He's sixteen, growing so fast that his bones hurt (literally), and stuck somewhere between little boy and man. When we were visiting friends last weekend, Youngest Son cheerfully played Legos for hours with the 6 year old. He sweetly helped out with the party set-up for the family we were visiting. He was playful and great to be around.

Yet on Saturday, when he was asked to do a few chores, he was snarling and mean. Spitting like a cornered bobcat. He hid in his room, emerging only for food.

He has to switch schools this fall, through no fault of his own (budget cutbacks) and both Dear Husband and I know this is weighing heavily on his mind. He doesn't feel like he's particularly good at anything. He was told by our Pastoral Associate at church to leave (he was sitting in the narthex during Mass, and she said that wasn't good enough), and now we can't drag him back.

My mom used to tell me and my sisters constantly when we were teens, "These are NOT the best years of your life. People will tell you they are, but they are NOT. Don't get down about it. It gets better and easier and more pleasant." Thank God, she was right.

When dealing with teens, it can sometimes to be hard to remember that culture is telling them How Much Fun They Are Having As Teens, when in fact, they are usually struggling. Hard. Be gentle. Even 6'5" teen boys are still that - boys, trying to figure out how to grow up. These are NOT their best years. These are their hardest years.
at August 12, 2013