If you're pro-gay marriage, here's a thought... 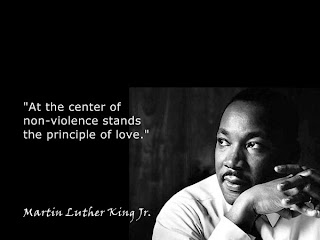 Many folks who are pro-gay marriage liken their fight for equality in marriage to the civil rights movement. I don't happen to agree, as I believe there is a difference to the way one is born (dark-skinned, homosexual, near-sighted, etc.) and the way one chooses to behave. However, for the sake of this discussion, let's go with the gay-marriage/civil rights comparison.

As a nation, we just spent some time reflecting on the Rev. Dr. Martin Luther King, Jr.'s speech at the Lincoln Memorial 50 years ago. I consider Dr. King a personal hero, a flawed man, but surely led by God to do some great things. He also knew a thing or two about how to change the mind of people who hated him and everything he stood for.

Recently, a Christian couple in Oregon (Melissa Klein and her husband) chose not to prepare a wedding cake for a lesbian couple. Their business, Sweet Cakes by Melissa, was founded, the owners said, on their Christian beliefs, and they believe that marriage is ordained by God to be between one man and one woman. Thus, they turned down the order.

In response to the complaint, the bakery's co-owner Melissa Klein argued that turning away the couple was "definitely not discrimination at all."
"We don't have anything against lesbians or homosexuals," she said in August. "It has to do with our morals and beliefs. It's so frustrating because we went through all of this in January, when it all came out."

It turned into war: a lawsuit (which the Kleins lost) and an spewing of hatred towards the Kleins. Here's just a little sample of what came the Kleins' way:

Klein told me he received messages threatening to kill his family. They hoped his children would die.

“You stupid bible-thumping, hypocritical b**ch.  I hope your kids get really, really, sick and you go out of business,” read one e-mail.

“Here’s hoping you go out of business, you bigot. Enjoy hell,” read another.

You get the drift. The Kleins have chosen to close their bakery, partly because of the threats to their family, and partly because other bakeries in the area were also being targeted, and they did not want others to lose their businesses as well.

Dr. King’s philosophy of nonviolence described in his first book, Stride Toward Freedom. The six principles include:


If the right to marriage for homosexuals and the civil rights movement REALLY are connected, then why are the proponents of gay marriage not following the person most responsible for moving forward the quest for civil rights in this country? Why are they not looking to his directives, his thoughts, his philosophy as their guiding light, as it were?

I wonder what the Rev. Dr. King would think of the Kleins. I wonder if he would have sent them an email, calling Mrs. Klein a bitch, or saying that he hoped their children died. No, we all know he wouldn't have. He would have done now what he did then: embraced them with love, prayed with them and for them, and called for a nonviolent solution.

Of course, this is only speculation on my part. Of course, this only makes sense, as well, if gay marriage and civil rights really ARE connected. Just a thought....