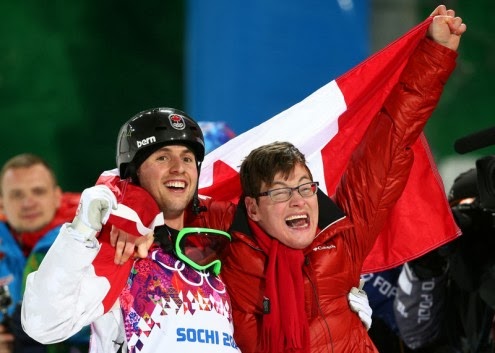 In case you haven't seen the story of Olympic Canadian mogul skier Alex Bilodeau, it's a terrific testimony to love, life, family and knowing what is truly important.

When Canadian Alex Bilodeau won the gold medal in moguls on Monday night, the first person he wanted to celebrate with was his brother Frederic, who has cerebral palsy.

“Whatever I do in life, my brother is my real inspiration,” Bilodeau said. “Just like you and I, he has dreams and most of them are not realizable to him. But he never complains that it’s not realistic to him. Every day I feel lucky to be a normal person who has that chance to go after his dream. He does not have that chance.

“And for respect to him, I need to go after that. With his motivation, he would be four-time Olympic champion. Every step is so hard for him in life and I have an easy path and I need to go after and do the best I can just out of respect to him. He lives his dreams through me. So today, Vancouver, for me, it’s the least I can do. He is my everyday inspiration.”

Bilodeau hugged his brother and the two jumped up and down in elation. It was similar to the scene in Vancouver when Bilodeau won his first gold medal in moguls. The Sochi win makes him the first athlete to win back-to-back gold medals in the moguls.
at February 11, 2014