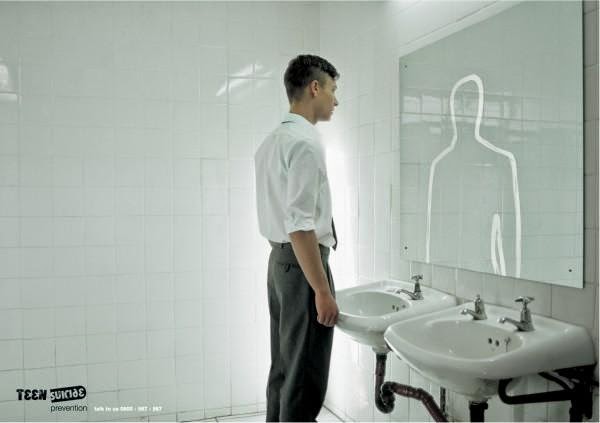 At The American Catholic, blogger Donald McClarey discusses suicide. He quotes G.K.Chesterton (a fine man, a fine writer, but not a theologian):

"Not only is suicide a sin, it is the sin,” Chesterton wrote: “It is the ultimate and absolute evil, the refusal to take an interest in existence; the refusal to take the oath of loyalty to life. The man who kills a man, kills a man. The man who kills himself, kills all men; as far as he is concerned he wipes out the world.” Chesterton goes on to say that the act of suicide is selfish: “A suicide is a man who cares so little for anything outside him, that he wants to see the last of everything.”

I do agree with McClarey that suicide is a selfish act, but he poo-poos mental illness:

Contemporary views on suicide of course would view that attitude as harsh and Neanderthal and usually blame everyone but the suicide for their act of self murder.

"Blame" is not the right word with suicide, just as it's not the right word when someone dies from complications from diabetes or heart disease. We all have the duty to take care of our health, but depression can bite you in the a** quicker than you can say, "Bob's your uncle." And that pit is incredibly hard to climb out of. Everyone in the world can throw you a rope, but many of them are greased, some fray and burn your hands, and you still have to do most of the work yourself. And when you're depressed, every action requires 10x the energy that it normally would.

Rather than quoting Chesterton, let's look at the Catechism of the Catholic Church:

2280 Everyone is responsible for his life before God who has given it to him. It is God who remains the sovereign Master of life. We are obliged to accept life gratefully and preserve it for his honor and the salvation of our souls. We are stewards, not owners, of the life God has entrusted to us. It is not ours to dispose of.
2281 Suicide contradicts the natural inclination of the human being to preserve and perpetuate his life. It is gravely contrary to the just love of self. It likewise offends love of neighbor because it unjustly breaks the ties of solidarity with family, nation, and other human societies to which we continue to have obligations. Suicide is contrary to love for the living God.
2282 If suicide is committed with the intention of setting an example, especially to the young, it also takes on the gravity of scandal. Voluntary co-operation in suicide is contrary to the moral law.
Grave psychological disturbances, anguish, or grave fear of hardship, suffering, or torture can diminish the responsibility of the one committing suicide.
2283 We should not despair of the eternal salvation of persons who have taken their own lives. By ways known to him alone, God can provide the opportunity for salutary repentance. The Church prays for persons who have taken their own lives.
at May 09, 2014